The E4 Method
The new method of client-centered ghost research. 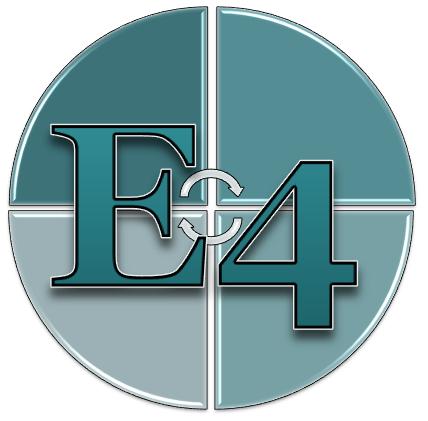 The "E4" Method made its public debut at the First Forensic Ghost Excavation Congress - Convention on June 24, 2012, in Brunswick, Maryland. Big thanks goes to John Sabol, Mary Becker, and George P. Hansen. The "E4" Method has since made its way around Ohio and to Virginia. A class will soon debut where you can learn even more than what is here and in the book

Welcome to the home of the E4 Method.

This site will be the home of the new E4 Method. This method is based on parapsychological, psychological, and various approaches used by police, military, FBI and other government agencies, methods I have developed for this field, as well as ones created by the "Ghost Excavator", John Sabol. This method helps eliminate the pseudoscience model created in reaction to television shows and the bad side of ghost culture. It embraces science and puts the client, environment, and objective observational studies at the forefront. This model is considered a skeleton model, one that can be molded to the various types of investigations that are encountered.

The E4 Method made its debut at the First Forensic Ghost Excavation Congress Convention in Brunswick, Maryland, on June 24th. The Method was a hit with those who desire change and a direction away from guessing and subjective approaches. This site will be continuously updated as I gather new data as well as release more aspects of the overall approach (I have kept some things under wraps since it ties in with other aspects I may dispose of).

"The "E4" Method: Breaking the Mold of Paranormal Investigation" released!

A primer book covering the basics of the "E4" Method has been released on March 9, 2013. The book picks up where this website has not covered. Many of the most intricate details of the "E4" Method are now available in this new book release. The book will be available on through this link or at my public appearances. I do have a full book in the works that will explain the methodology in greater detail so that many questions that have popped up will be answered. I will also discuss some of the changes that have taken place since field work using this method has taken place.

Just what is the E4 Method anyway?

The E4 Method is but one part of a new investigation method created by myself, Brian D. Parsons. While many parts of the investigation procedure are in use by many, no one that I am aware of uses the various methods I am about to discuss collectively. To truly understand and appreciate this method, we will first view the standard model of investigation used by a majority of paranormal investigation teams all over the world. 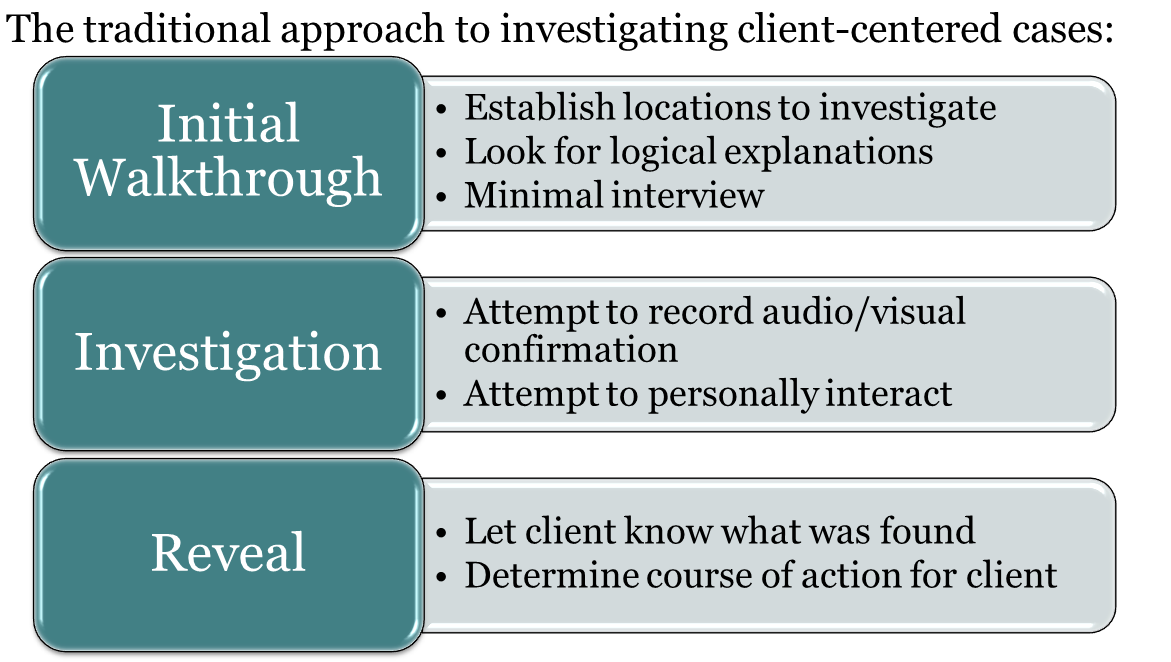 This three pronged approach, while a nice standard model, is severely flawed for completing scientific research and investigation. This method is very constrictive to the types of investigations that one may encounter and is based solely on subjective experiences by the investigation team. Also, with a mere initial walkthrough (also called a "site survey" by many groups) and a minimal interview session there is a severe lack of understanding of the client, their background, experiences, emotional makeup, and other details that are lost due to the obsession with the onsite investigation.

The bottom line with the three pronged approach is this; get as much information as quick as possible so that we can set up our gear and go "lights out". This type of culture toward the investigation process has created the focus on the personal experience, the ghost, and has put the client in the background along with the environment they live in. I created a Client-centered model that addressed some of the deficiencies of the above approach. 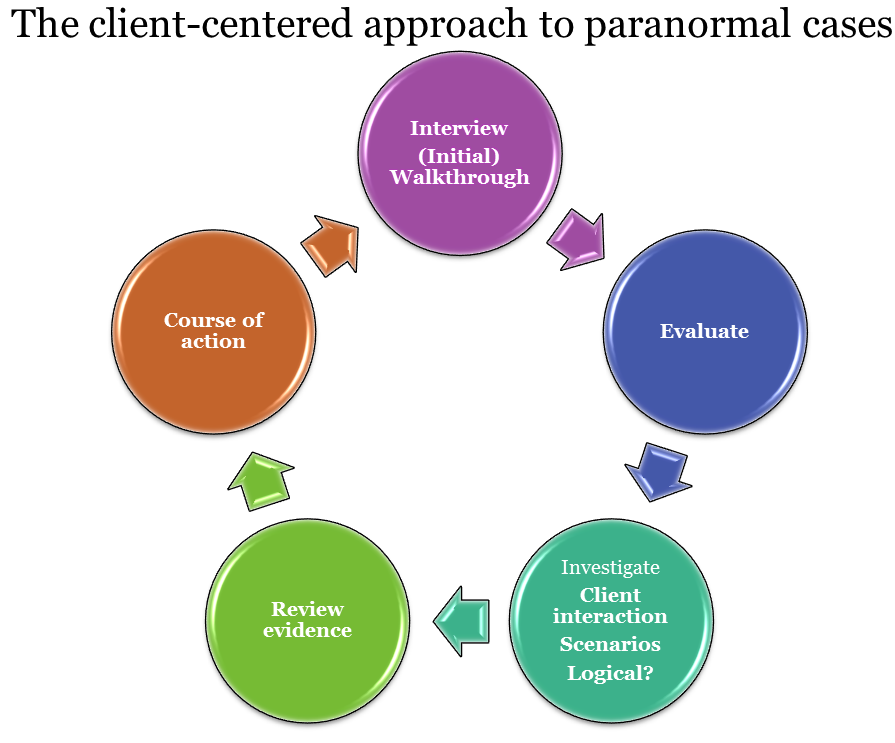 The first thing you notice is that it is like a wheel. This method begins at a thorough interview and continues through various steps until the case comes to a conclusion that the client is happy with. This flowing process allows for the investigation to go to any previous step or include new steps (consult clergy, psychologist, home inspector, electrician, another group to follow up, etc.). The client centered process also has a break between an interview and the investigation. This allows for us to determine if this is truly the right step for the client, although an initial course of action is typically discussed prior to leaving the interview. It is also considered that just because an investigation has been conducted that a determination should be made. This process considers an investigation as just part of the process not the focus.

This process still has its flaws and limitations. The biggest limitation has been the client themselves. With the client-centered approach I wanted the client to be part of the process, while I thought this was a good idea I now realize that the client needs direction not control. Asking the client what they felt the next step should be usually does not work out how I feel it should and usually ends up with me debating with them the pros and cons with what they have decided. With television shows being the biggest influence on investigation methods as well as the knowledge of clients, the standard model is the expected model that will be used in their home. Many clients merely want an investigation to "validate" their personal claims. This is still the goal despite my educating them that there is no way to validate something that is not proven to exist as well as the fact that spontaneous events happen due to various triggers caused by the clients themselves. The biggest flaw is the fact that the typical paranormal investigation is still a part of the process. Even by using better methods of investigation the individuals within my group have constantly wanted to go the easiest route and become like the television shows (investigating in the dark, using subjective experiences, not utilizing the client, etc.) since this has become the way its done. Even with like minded investigators the client has expectations based on ghost investigation culture and we are stuck in "lights out" mode regardless. Other shortcomings appear when "solving" a case using cleansing or other psychic methods to alter the environment. Whether this is actually caused by the psychical removal of a spirit, helping them cross, or just belief on the part of the client the answer is unknown. While it is great to help people through their problems it offers little scientific credibility to use pseudoscientific methods to come to the conclusion (however, many times this is just the right thing to do for the client). How does this help future clients?

After evaluating my methods along with the issues I created the E4 Method. This method eliminates pieces that do not work and uses those that do. It focuses the investigation on two specific areas and then breaks these down into smaller parts. The investigation team merely serves as observers, recorders, and directors in the research methods created for each specific paranormal research project. Here are the basics of the E4 Method: 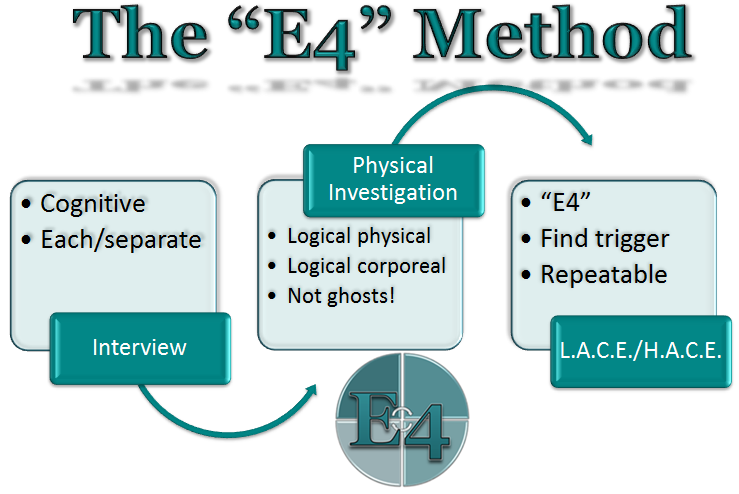 The E4 Method begins with the interview. This is the single most important step in this type of investigation. Without gathering facts you will have less to go on with logical reasons, potential psychological issues, as well as determining possible triggers. The interview process uses specific methods geared toward those involved with events that are of highest interest to the possibility of repeating or finding a trigger for.

The second step is to conduct a physical investigation, or examination, which looks at the case from a skeptical and logical standpoint. This step looks for logical solutions to as many of the events as possible. This is not an investigation to debunk claims or to prove anyone wrong, but to merely evaluate the environment to possible logical solutions for the top types of events in the case. This investigation focuses only on logical events and is not concerned with ghost activity. Why? The key here is to help the client maintain an open mind to other potential ideas, they have obviously contacted a paranormal group since they feel a ghost is the cause. Bringing anymore attention to a ghost than what is needed is unnecessary (obviously if a spontaneous event occurs the investigation may shift toward a spiritual investigation).

This physical investigation also evaluates the corporeal aspect, the living occupants, as the motor behind the events. Was there a sudden shift in belief set? Have they been influenced by T.V./media? How do their religious views mirror their belief in what is happening. Are there signs of this being caused by a mental disease or physical/mental stress? (if the events are said to be the cause of stress explore this deeper as many times the client blames the activity after they have begun to break down). Once these physical means are eliminated and if the case seems to point to a ghost then it is time to move to the next step.

The third step is the Active Context Exercises, which differs greatly from a traditional paranormal investigation and is designed to be more thorough as it focuses on the living and the enivonment versus the "ghost". This process is not limited to what type of ghost may be driving the events; apparition (intelligence/communication), haunting (residual energy, no intelligence/communication), poltergeist (driven by living stress and therefore back to the second step, unless this PK activity has "tagalong" apparitions), or unknown (investigation will help determine). Strangely, most ghost cases are residual hauntings, but most investigators ask questions and attempt a connection despite the imprinted nature of the events where no direct response would be possible.

The first part is to establish the study criteria. Now that we have eliminated the physical explanations (hopefully most) we can design client based (or investigator based) activities to attempt a spontaneous manifestation. Through the E4 method we utilize specific methods and ignore others that just don't work. The E4 method focuses on the client's events and attempts to go beyone a mere "reenact" with using as many details as possible prior to the event, leading up to, during, and after the event and includes the potential for investigators and clients to act out scenarios of former inhabitants based on cultural references, specific activities, and specific knowledge of the people of focus. Through these recent or past scenarios we hope to establish triggers which will allow for more in depth investigation as well as repeatability of the spontaneous activity. The recent scenarios also serve to help the client's memory with recalling details of the events and may also help lead to their recovery or acceptance of the activity or logical solutions.

Read more about the E4 aspect in detail at the link at the top bar of this page.

Feel free to use the banner below for your website. Please right click and save the image and do not use the current source of the image on your site. Please direct the image to: http://e4.ghosthelp.net